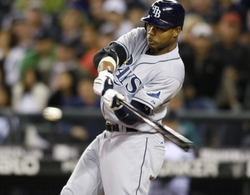 FoxSports.com reported a couple of days ago that the Yankees may pass on Matt Holliday and Jason Bay this off season, in order to pursue Rays OF Carl Crawford next off season.

Crawford will be 30 next off season. Crawford had 60 stolen bases this season, and has led the Majors in that category in four seasons. He has hit over .300 in four of his past five seasons.

This is a bad idea in my mind. Compared to Holliday, Crawford is just faster. Holliday has a much higher batting average, and much higher power numbers.

The essential truth here is that the Yankees need an outfielder right now. Holliday and Bay are not just free agents to look at, they are free agents that they actually need. The fact that they are defending champs should not alter their aggressiveness. If there is one thing that has made this team so successful, it’s their ambition to improve each and every year. Not the year after. ⧠

Poll of the Day:
Should the Yankees wait out for Crawford?(poll)