As it stands right now, the Yankees will go into opening day with the following rotation: CC Sabathia, A.J. Burnett, Andy Pettitte and Javier Vazquez. Not bad for the first four. But the number five spot remains open.

The Yankees have choices. They can go with Joba, they can go with Hughes, or they could slip in Serigo Mitre, who just yesterday signed a one-year $850,000 deal, according to the Associated Press.

If you have read anything I have written, you will notice a hatred of mine for the idea of putting Joba in the rotation. Hughes is a better starter and Joba is a far better reliever. So it seems pretty simple doesn’t it? Just put Hughes in the rotation and Joba in the bullpen. It would work as both a long term and shor term solution. But, the ridiculous Yankee coaching staff philosophy has me backed in a corner.

First off, let’s just remove Mitre, who most certainly does not deserve a spot over Hughes or Joba.

Who should be the fifth starter for the Yankees?(polling)
But back to the issue. Just as the Yankees had a “Joba Rule” thing in effect, you can bet your dollar they would have some “Hughes Rules” as well. Which makes me very skeptical. There is no doubt that you can attribute Chamberlains atrocious starting pitching to the fact that he was constantly on a pitch count. It made him always think about the pitch count, which took his focus away from being aggressive.

In 2010, the wheels would be off for Joba, so maybe he would be a better starter. I’m afraid that the same thing that happened to Joba will happen to Hughes, should they put him in the rotation.

Bottom line: With Bruney and Coke gone and left field taken care of, the Yankees need pitching, and lots of it. With the bullpen thin, Chamberlain and Hughes need to stay there. So, as the rotation stands right now, there are only three guys there. Cashman has hinted that Lackey is too high of a price, so lets take a look at a smaller investment: Kelvim Escobar.

Chat or Chuck?
Chat. With three accomplished and reliable starters in Sabathia, Burnett and Pettitte, a big game ace pitcher, such as Lackey, is just unnecesary. Escobar can be a reliable end of the rotation pitcher. Like I said, the Yankees need pitching. Every option is important, and Escobar is a very good option.

Poll of the Day:
Should the Yankees sign Escobar?(surveys)

Hes the one we have all heard about. The most prized possession of the 2009-2010 off season. After a shaky ending in his time in St. Louis, Holliday is up in the air and ready to sign a big long term deal.

Chat or Chuck?:
Chat. This is the guy the Yankees need. This is the guy that can make the difference. Lets face it, Damon and Matsui will not be on the Yankees together next year, and the Yankees need to fill that hole. Holliday will make this team younger, and can be part of a core that will become a dynasty. The combination of Holliday, Teixeira, A-Rod, Sabathia, Chamberlain, Hughes, Cano, Burnett, and Cabrera looks nice for the next five years.

Predictions:
The Yankees have made it clear that there first priority is a starting pitcher. Having said that, the Yankees will go aggresivley after someone to fill that spot and will then come aggressively after Holliday later in the off season, with a big, long term deal.

Poll of the Day:
What should the Yankees do about Holliday?(surveys)

What do you think is going to happen with the backup catcher situation?
Bring back Molina, or use Cervelli? Or will it be someone entirely
different? What would you like to see happen?

Good question. Of all of the big Yankee free agents — such as Damon and Matsui — little attention is being given to a player that, for a lot of the year, came up in conversation a lot.

To answer your question, it’s very tough to predict what the Yankees will do. All I can say is that the Yankees are very high on Molina and his defensive abilities; starting him in the World Series over Posada will show you that. Obviously, they think he is extremely important to their huge investment in A.J. Burnett, so in that regard, I would say they would bring him back. Plus the fact that he wouldn’t be very expensive.

On the other hand, the Yankees have very openly said that they want to get younger and more athletic, and in that regard, Cervelli would be the obvious choice.

As for me, I would like to see them show some confidence in Cervelli. Obviously, Molina is one of the best defensive catchers in the league, but Cervelli is certainly not a liability behind the plate. As Molina plays a huge factor for Burnet, Cervelli actually plays as a huge factor for an even bigger investment in C.C. Sabathia. When C.C. threw to Cervelli, opposing hitters hit just .195 as opposed to .233 with Molina and .262 with Posada.

We also have to consider offense. Molina has really become a liability in that regard. This season, Molina hit .217 and Cervelli hit .298. Each had just one homer.

**** SEND YOUR NY NOTES ****
Have a burning question? Something on your mind? Send them to me via twitter @NYColeman or email abiteoffthebigapple@gmail.com. Once I have your NY Note, I will reply to it just like I did
here. Be sure to include your name and location.

On December 12th, 2008, A.J. Burnett signed an $82.5 million contract with the Yankees. I sent an email to my dad who as at work with the link to the article on the signing. My dad replied by saying, “don’t count your chickens until the eggs hatch.”

327 days and 28 million seconds later, the Yankees passed around their 27th World Series trophy, for the first time in nine years. From CC’s horrible start on opening day, to A-Rod’s walk off in the fifteenth inning against the Red Sox, the Yankees have climbed every mountain, jumped every hurdle and now stand atop every team in Major League Baseball.

“You realize how difficult it is to get here,” Yankees captain Derek
Jeter said. “I never lost sight of the fact that it’s very difficult to
get to the World Series, let alone to win one. You realize and remember
how hard it is.”

In his potential final game as a Yankee, Hideki Matsui tied a World Series record with six RBI’s in a game, sealing up his World Series MVP honors.

“This is what the Steinbrenner family has strived for, year after year
— to deliver to the city of New York,” Yankees manager Joe Girardi
said. “To be able to deliver this to the Boss, the stadium that he
created and the atmosphere around here, it’s very gratifying to all of
us.”

Probably most gratifying to Yankees third baseman Alex Rodriguez. The king of
baseball has now sealed his resume. Alex Rodriguez has now won a
championship and is now the true champion that we all know him to be.

Andy Pettitte stepped up big for the Yankees on three days rest, and in possibly his final game in pinstripes, helped get his sixth ring.

“This is what you set out to do when you go to Spring Training,”
Pettitte said. “It’s a great feeling to be able to accomplish with the
rest of the team. This is what you play for.”

Poll of the Day:
Which of the following free agents should the Yankees resign? (Select as many as you want)(opinion)

Series resumes Wednesday in New York with Yanks up 3-2.

The Yankees and Phillies are back in New York and will take their workouts today at the Stadium.
As if the Yankee loss in game 5 wouldn’t cause enough uproar among Yankee fans, there is also the Burnett debate smeared over it.
Girardi has made some questionable moves at times, but seriously, in any baseball game, who would you rather have on the mound, Burnett or Gaudin? There was no way that Girardi was going to tell this huge offseason investment to miss out on the clinching game.
Burnett going on short rest also sets up Pettitte — with the most postseason wins of all time — to pitch the clinching game in New York against Pedro Martinez. That situation doesn’t sound to bad to me. Not to mention you have CC to fall back on in game 7, just like the ALCS.
Pettitte on short rest has a 4.15 ERA in his career and hasn’t done it since he was an Astro in 2006. Forget the numbers, Pettitte has pitched in the postseason more than any other pitcher in the history of the game, I don’t think we have to worry about anything.
For those of you playing flashbacks of 2004 over and over in your head, let me calm you down. The Yankees led the league with a .704 winning percentage at home. They outscored opponents by 101 runs and hit 136 homers in their new park.
And another thing, for all of the chaos and commotion taking place in New York over this game 5 loss, let me tell you something. The Yankees went into the defending champions home and beat them 2 out of 3. The only pitcher they have lost to is the Phillies best and the Yankees have a chance to clinch in their new home with the most experienced pitcher in the world on the mound. What are you complaining about?
*
Poll of the Day:
Who should have pitched game 5 for the Yankees?(polls) 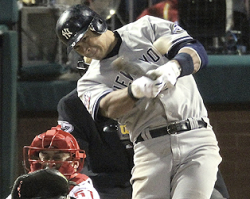 The Yanks are up 3-1 in the 2009 World Series and with a win tonight, can lock up their 27th world championship. The Phillies, on the other hand, will look to send this series back to New York for a game 6 and hopefully, for them, a game 7.
The Yankees pulled off another heroic win last night. A 4-4 game going into the top of the ninth, and with two outs the Yankees got something going. Damon stole second and third base on the same play due to the extreme shift that was on for the left handed hitting Teixeira. A-Rod drove him in with a ringing double down the left field line and Posada drove in two more with a single.
“We haven’t accomplished anything yet,” said last nights hero, Johnny Damon. “We’ve won three games and that’s not what we set out to do. We would like the fourth, and when this playoff time started, we set out to win 11. We’re at 10, and hopefully we can get number 11.”
Win number 11 would give the Yankees their 27th title and their first since the Subway Series 9 seasons ago.
“We play as a team and play like every game is our last game,” Chase Utley said. “So that’s not going to change how we go out there.”
Here is a summary of the game 5 pitching matchup:
Yankees probable pitcher:

A Bite Off The Big Apple
Blog at WordPress.com.