Wow. Who would have thought that the first big deal of the off season would involve the defending champions? According to the NY Post, the Yankees have a agreed upon a three way trade that would send Granderson to the Yankees, Ian Kennedy to the Diamondbacks and Phil Coke and Austin Jackson to the Tigers.

Smart or Smack:
You tell me. I’m torn on this one. Granderson is a great player who is young and can make a difference at Yankee Stadium. It was a good thing that the Yankees didn’t give up too much. They still have huge prospects waiting to come up, so theres still some hope in that regard. Coke and Kennedy I can live without, but with Bruney gone as well, the Yankees better have a plan for this suddenly thin bullpen. To me, what this really means is that the Yankees have kind of pulled themselves out of the race for Halladay. In the end, as much as I was looking forward to watching Jackson come up and grow, the thought of a second trophy next year is uncomparable. Thats what you have to play for.

Poll of the Day:
Are you happy with the deal for Granderson?(answers)

Oh, no, here we go again. More Halladay in the news. Now he says he won’t accept an offer once spring training starts. That means one thing: He must REALLY want out of Toronto.

I think Halladay knows at this point that offers are going to come his way, but this little outcry is just a scheme to get teams on their toes quickly, or at least I think it is.

But what this does for me is it scares me. Time and time again I pray on this blog that at the start of the 2010 season, Austin Jackson and Jesus Montero will be within the Yankees reach. Of course, that means that Halladay won’t be on the team.

47% of you said in a poll that you would not give up valuable prospects for Roy Halladay. That’s not enough of you. But what matters is what’s in the mind of Brian Cashman.

Here is how I see it. I said yesterday that the Yankees need a starting pitcher. Cashman knows that, and is most definitely looking at Halladay as one of his options. That of course, does not help me. What it comes down to is this: Would you rather see Roy Halladay, an already proven pitcher, come to New York and dominate for a couple of years, or would you rather have the joy of experiencing the thrill of watching a potential hall of famer break into the big leagues?

Cashman wants to win, so do Yankee fans. But, we won it without Halladay, and we can do it again.

The holidays are approaching, so I think it’s a good time to put together a wish list. For the Yankees, of course.

That’s what I want. What do you want? 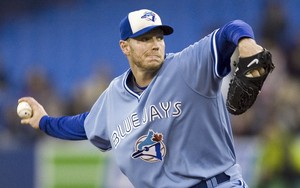 Blue Jays pitcher, Roy Halladay, would waive his no trade clause for a deal that would send him to the Yankees, writes Bob Elliot of the Toronto Sun.

Bob Elliot quotes an unnamed Major League executive who said, “I don’t know when he is going and I don’t know where he’s going. But I
do know that Halladay has told the Jays he’ll approve a trade to the
Yankees.”

The New York Daily News wrote last week that the Red Sox were putting in a “full-court press” for Doc and intend on doing it before the winter meetings begin on December 7th in Indianapolis.

If the Yankees were to trade for Halladay, it would be in a package that would include many young stars. Among which are starting pitchers Joba Chamberlain or Phil Hughes as well as top prospect catcher Jesus Montero or outfielder Austin Jackson.

Once again, I hope the Yankees can resist this. No doubt Halladay is a great, great pitcher, but at some point you need to just stop. To me, the value of these prospects and the thrill of watching them grow is way more desireable than watching Doc dominate in pinstripes.

New segment “The Pulse” looks at comments and information from various sources and I give my comments on it.

Jackie Robinson was not only a monumental figure in baseball, but also in American history. He broke the color barrier in the game and played a huge role in civil rights. Michael Jordan made some shots, that’s it.

Obviously this question was not intended for me, but I will answer anyway. In the first one, the Yankees are the obvious choice. They would be going up against two deflated teams. Angels are also losing Vlad and the Red Sox are just getting older and older. The Phillies are the favorite it the second, because they are just a mile better than both put together. Then, you have the last one. It is interesting. The Dodgers are all down hill to me. The Cardinals made it this season with two miracle pitching performances from Wainwright and Carpenter. With losing Holliday in there, the Cards are a big question. The White Sox just aren’t very good. So of all of them, I’m going with Joe Torre and the Dodgers.

Blogged The Baseball Nerd: Within eighteen months there will be a video replay rulebook issued to
every ump and manager and included in every media guide. You watch.

Keith Olbermann argues that MLB never stays true to their word and always does the things they say they will never do. In this case, it’s instant replay. I’ll make this simple. The umps were atrocious in the postseason. Now that technology is so advanced and will continue to grow, fans will get more and more fed up with the Umps. Eventually, MLB will need instant replay.

Blogged A Bite Off The Big Apple: 80% of you would not give up Austin Jackson in a deal for Curtis Granderson.

I agree with all of you. Grandersons stats have pretty much all fell this year except for home runs. The Yankees are in way desparate for a center fielder. Jackson has been their top prospect for a long, long time. He’s young and has a lot of potential. Let’s give him a chance, at least.